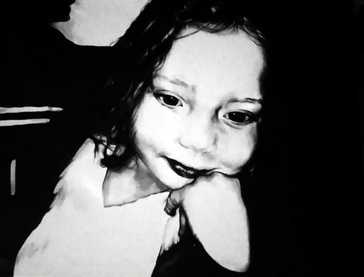 The communicative intensity in Anna Santilli’s artistic production is the result of a reasoned balance amongst aesthetics and conceptuality. Her artworks are the result of a quest for answers which expresses itself through the use of black and white, trespassing the schemes of the classical figuration.

What emerges is the incisiveness in representing a reality beyond the artist’s personal vision, and where the real becomes a pretext in order to express contents, to look for answers, to elaborate topics. The essence of the represented scenes is realized in the synergy of the shapes and the synthesis of the colours, where the “non-colour” is often accompanied by the disruptive red, with its expressive dynamicity, to strengthen the boundary amongst objectivity and concept.

The treated scenes seem blocked in a photographic shot that Santilli analyses in every detail, exploring the physicality, the mimics, the expressions of every subject in order to enhance every little faucet, in the everlasting research of meanings and new recodifications.

What the artist renders is an image highly subjectively charged, where the contrast amongst lights and shadows strengthens the expressive charge of the narrated/treated subjects. Atmospheres sometimes dreamy or metaphorical emerge, in which is expressed the dichotomy between white and black in its function of strengthening the imagination and a certain symbolic taste.

Santilli’s artworks are stimulating, baring a direct and disruptive message, sometimes provocative, sometimes light-hearted: works that tease the observer, arousing questions which are not always easy to answer, but in this sense they answer to the intrinsic goal of art itself.