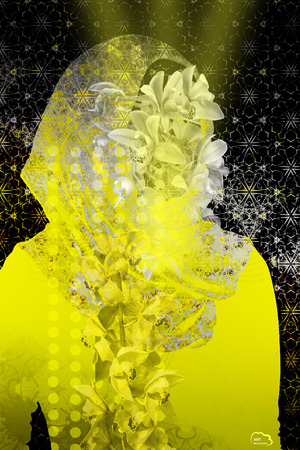 Mirja Nuutineen’s production is surprising and odd, and the artist manages to adjust between vision and reality, to balance different and similar elements in a game that teases the observer, in order to make him actively question an otherwise mere aesthetic image.

We are in front of a captivating, playful, ironic and smart dimension, in which the contents are presented in an easygoing but meaningful way, in which the subjects, extrapolated from past iconography, are merged and overlapped with contemporary symbols, in a harmonious balance which enchants the observer in a prolific and constructive dialogue.

These exuberant images become a means for a message, revealing the everlasting and ever-existed need for communication which is common to all mankind through history.

Attracted and curious of communication in all its various forms and its evolution through centuries, Nuutinen is able to capture underlying messages of today’s society, to discern that intrinsic need of the human being of being understood and the need to leave a mark. From graffitis to social media, her reflection is attentive yet heart-lighted. Sensitive to the interpretation of a collective subconscious with the end of leaving a trace for future generation and to current mass media, often chaotic and absurd.

Mirja Nuutinen’s art reflects our time; an art which joins tradition with innovation both in its choice of subjects and realisation techniques, which consist in a combination of analog and digital. This constant dichotomy reflects as well on the artist’s thinking, which is constantly attracted to paradoxes and those aspects of life which are different and the same, which surprise us and drag us towards timeless atmospheres.

Mirja’s artistic universe combines many elements, and acts as a mirror to her personality: a curious, ironic, energetic woman, who lives amongst Finnish nature but never misses a chance to travel, to discover new cultures, new traditions, new stories. All this obviously emerges from her works, which are all linked through a pop yellow thread – incisive and captivating – which highlights the fun and stimulating content while never being pedantic or academic. Here lays the artist’s ability, in surprising us and making us reflect light-heartedly.