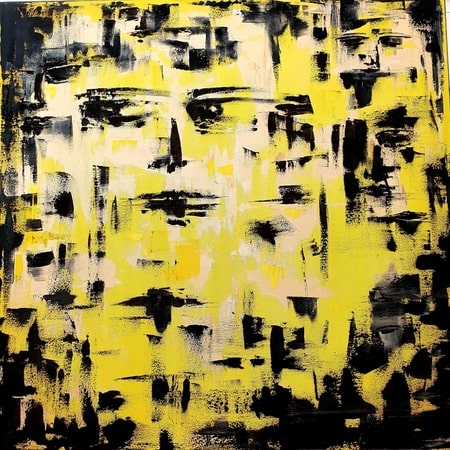 The fascination with Francesca Ragona’s paintings arises from a vivid and fiery chromatic impact: it is a painting of coloured abstractions, opening up to infinite worlds and mysterious, charming and unidentified contexts, charged with feelings and conceptuality.

The Artist lives the creative process in its cathartic function of liberation of those underlying strata of the human soul which appear scarier when kept hidden.

Hence the disruption of the shape, accompanied by a colour present in its total freedom and independence, represents an introspective trip towards intimate and secret realities, which push us to discover and understand sides of oneself never thought. The canvas is scary, especially when it is white, as the artist knows its potential, and that innate ability to bring out a creative and psychological impetus which encloses, with every brush stroke, an innate disruptive force.

These are scenarios full of the deepness of sensitive human soul, of his contradictions, of his fears, and especially of his fragilities. It is a visceral and spontaneous panting, which generates an oneiric vision in total autonomous narrative, made of details which appear unexpectedly and of an underlying figuration, which adds that feeling of ambiguity and disquiet which teases the observer to an analysis ever more in-depth.

The emotional pulsion is freed in imaginary shapes which becomes dreamy presences and absences, where reality and instinct are antithetical elements as well as complementary, marking the phases of an ever-changing trip.

Ragona’s artistic process becomes a process of alienation and estrangement, in which the potentiality of the colour is eviscerated, helping to strengthen the instinctive vibration of shapes and figures ever more emblematic.

The evocative character of her paintings is linked to mainly subjective state of minds and thoughts: fragments of suspended visions, which unfold in images through a sensitive and sentimental language and where the strength and energy of the tones give rise and character to a compositional structure.

The painting becomes the symbolic place in which Francesca Ragona doesn’t take anything for given and puts herself out there, letting her senses guide her, pushed by a disruptive and continuous tension, making herself go to the purest dimension of the being.