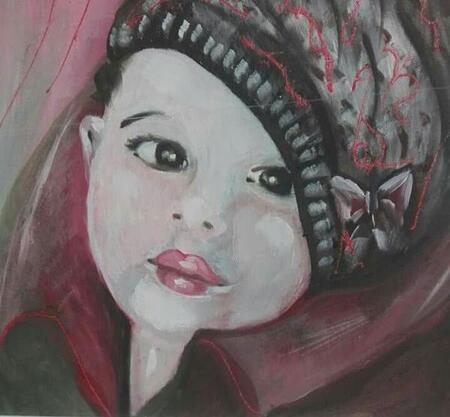 Stefania Nicolini’s artistic production is an identitary trace rich of vibrations, melancholies, authentic feelings and states of mind where there is no escape from reality, but a summoning and affection for the experienced, where the characters convey their emotions through poses and expressions sealed by a strong artistic technique.

It is a pure and direct pictorial truth, where images tell concrete stories, showing the depth of a soul who loves to observe her own world with a slow gaze, contemplating, revealing the love for who and what is around her. It is a trip to a discovery of memories, remembrances and feelings which materialize in timeless shapes to which the artist wants to give immortality by imprinting them on canvas.

This intimate painting, at times whispered and at times more explicit, constantly maintains an evocative aura, sign of an autonomous research path, defined by a distinct character, which shows the urgency and intimacy necessary to tell her own private universe.

Figures and landscapes communicate in a direct way with their observer, making them live in a sort of familiarity with what is seen: hence an empathetic dimension of the painting emerges, aiming to involve the observer thanks to an immediate perception of the feeling the image renders.

Nicolini’s personal technique is the intrinsic reflection of the will of expression, which is opened towards an infinite and captivating creativity, where brightness and the delicate drafting of brushes mould the shapes in an absolute balance with the creator’s state of mind.

The strokes are fast and brief, and show on the painting with spontaneous movements, the result of a language of absolute originality, based on a choice of colours now delicate and romantic, now bright and vibrating, reminding of a light movement which takes over the pictorial space with a cosy brightness, able to completely attract the observer as it captures not only the visual sphere, but more importantly the emotional one.

The figurative image is in harmony with the poetic image and is revisited a proposed again in order to let us into a new perspective, towards those details that allow the artist to look into the deepness of reality and of sentiments.

Stefania Nicolini’s artistic process develops through a simplifying of the narrated image in the urgency of translating the essence of what is perceived and to communicate its emotional impact through her own passionate temperament, which allows her to reach an interpretation which is able to move the soul of its observer.