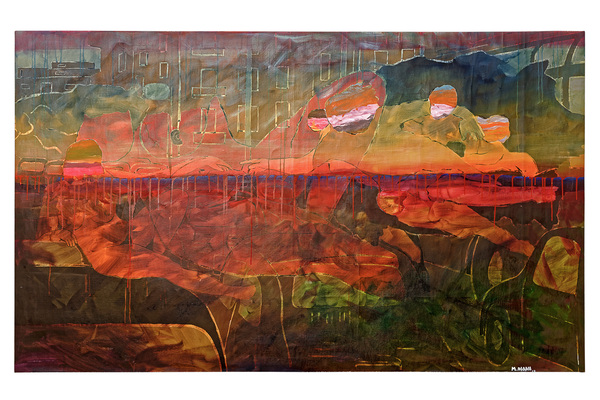 At the core of Maurizio Diana’s production we can find a profound existential reflection, a consistent poetic line, expressing the most intimate essence of each work of art, striving toward a research quest and stylistic innovation.

The essence of a precise figuration connotes the artist’s will to direct his painting toward a meditative dimension, animated by emotional vibes which lead the observer to a world of questioning to which it is difficult to give an objective answer. It is in this atmosphere slightly delineated, imaginary and evanescent, that the ever-changing human essence is located.

The need to reach a new pictorial technique, the “enlightened figuration”, dynamic and actively interacting with the observer, becomes expression for a compelling necessity to communicate an attentive reflection on the human condition, which is then shared with the public and hopefully becoming a stimulus. So, while nature and landscapes are projected on canvas, the figure is only slightly hinted, as if it were a shadow, supporting and reinforcing that idea of existential evanescence which is common to a humanity in crisis, unaware of the superficiality in which they are drowning.

Undisputed constant of his creative iter is the will to give meaning to everything, to sense and capture the essence of the matter, awakening that perceptive ability which is in all of us.

The figures in dim light become a symbol for the modern man in crisis: a crisis of conscience which brought the individual to live in an ephemeral dimension, to feel lost in front of social, economic, ethnic, cultural tensions… The contemporary man, constantly bombarded by changes which modernity obliges us to, is lost in a detached reality and feels the impelling desire to find again the deepest sense of the Universe in which he lives.

Men feel the need of a humane spirituality and the desire to recover the purest value of life. In his everlasting quest for a sense and for concrete answers to the existence, the artist expresses the urgency of a religion-less spirituality, an inner spirituality which is intimate research and recovery of the sacred.

The artist is able to communicate the energy through the lively and dynamic use of the light, which creates a bond with the observer thanks to a savvy use of lights and shades: a metaphor for the known and the unknown, for the sacred and the profane, and which gives rhythm to his expressive elegance. In this context, painting becomes image of the passing, conceived as a transforming experience which, from the most hidden and personal core, embraces a collective dimension.

The use of fluid colours, their dripping, the lively and vibrant textures express a contemporary condition which emphasizes a state of transition, communicating the continuous transformation of the visible and reaching precious contents of analysis, synthesis and logics. The pictorial technique supports and emphasizes the thought which sustains Maurizio Diana’s whole production, fully representing that dynamic state of reality, suspended among light and darkness, among beginning and ending, and liberating painting from that stillness in which, by its own nature, is usually entrapped.