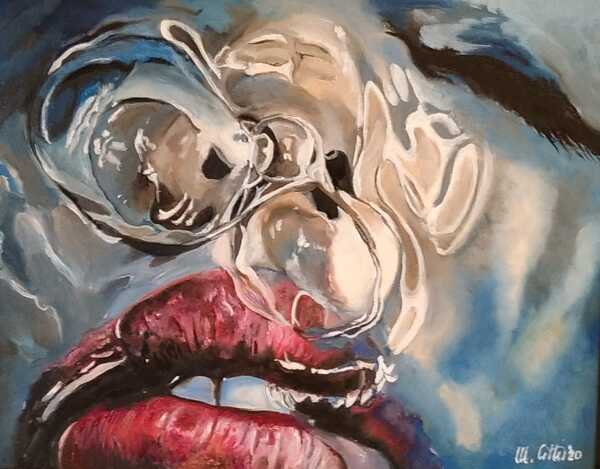 Her painting is of technical ability, of attentive study of the colour, of expressive knowledge of the chiaro-scuro, of a polished creative language, pushing her to always experiment with new subjects and explore an ever more intimate and private dimension.

Loyal to the figurative, Citti starts with a production of religious character, which has its roots in the most noble historical-artistic tradition, whilst never abandoning the will to humanize her characters. Generally, there is always a personal trait in her work, and the always-present will to capture the soul of what she represents. Her subjects never lack their own interpretation: they are strongly expressive and, whether they are extracted from classic iconography or from a familiar context, they all have in common a psychological value, which transmits emotional liveliness and existential truths.

Manuela Citti’s poetic language is sophisticated, always aiming to feel and let feel the profoundness of the being, to delineate an intimate universe, expressed through creatures suspended in their thinking and their embracing silence.

It is on the topic of silence that she focuses on in her latest pictorial quest: the will to create a meditative context able to comprehend the essence of the matter.

Attentive observer of the present, Citti focuses on the condition of the modern man who, caged in a mediatic bulimia, lives amongst the noise of a fast-paced time, thrown into a deafening sound, which rendered him totally incapable of connecting mind and soul. In this detached dimension, none of us has the courage to look inside, to analyze and discover our purest and most authentic part, but painting is able to free us from every limitation, to put us in contact with our most intimate emotions, with our truest desires, and Manuela Citti’s works look for the essence of what is the poetic sense of existence. Her faces capture the hidden expressions of the characters, translating into image something immaterial and inexplicable through the simple verbal language, generating a deep explorative dimension of the sense of things.

Tale, introspection, dream, vibrations, thoughts are expressed with simplicity and interpretative honesty, in a narrative continuum which looks for the contact with the observer, aiming at giving a visual answer of the artist’s thinking, and not just a mere aesthetic experience.

Every painting testifies the necessity to externalize the intimacy of the creator, the will to move the human soul with his unrest, the ability to go deeper and deeper, translating in images those profound silences, which speak louder than words. The expressive energy of these atmospheres of solitude focuses on the lyrical use of the light, which caresses the bodies, as in La Pietà, emphasizing the sweetness of the face of a “mother” Madonna, and rendering a human and familiar dimension, or offering that sense of suspension and abandonment, highlighted by the fluid strokes of the colours in Giochi d’Acqua, or even the attentive and inquisitive face of a woman of something undefined in Giochi di Luce. In each painting the observer can get lost in reflections, accompanied by hand by those subjects, who become interlocutors and confidants, bearers of a message, revelations of a vision.